The first case testing whether sufficient protection was available for medical staff working on the front line against the coronavirus in South Africa, has resulted in an ignominious conclusion for the union that brought the legal action. 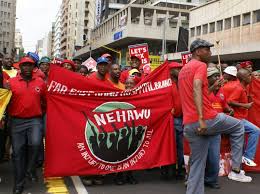 Nehawu in court over PPE

The National Education Health and Allied Workers Union (Nehawu) launched its challenge as a matter of urgency in the South African labour court, alleging that the government was not providing adequate protective gear to Nehawu members working in particular hospitals. In the end, however, it was unable to provide any evidence of a lack of personal protective equipment (PPE) at any of the medical facilities mentioned in its claim, and withdrew its case.

But despite that withdrawal the court gave a full judgment, reciting information provided by the government about the stocks of PPE available in the hospitals or ordered. The judge said it was necessary to evaluate the union’s claims in a formal, written decision so that the public was assured about the situation.

The case is important because it led to the national Minister of Health giving a clear statement of the preparedness of SA’s medical facilities for dealing with Covid-19 in relation to health workers’ protective gear. It is also important because the judge spelled out that a court could adjust the ‘standard of what constitutes frivolous and vexatious conduct’ in litigation so that parties who pursued ‘obviously untenable legal points’ or used the court as ‘part of power-play’, or made allegations they could not substantiate, would know that they risked a cost order if they should lose. In other words, the judge gave notice of how a court might consider the question of costs in a case brought at a critical time like this, when the case involved serious claims that could not be backed up.

The case brought by Nehawu is significant not least because of crucial allegations raised – and dismissed – about the availability of crucial protection for health workers at the frontline of the country’s battle against Covid-19.

The union claimed the Minister of Health and his provincial counterparts had failed to ensure that health workers were provided with personal protective equipment (PPE) and said they had not issued guidelines about the use of this equipment. Since serious shortages of PPE has bedevilled handling of the pandemic in the UK and elsewhere, there was particular public interest in the dispute in SA. However, the case had hardly begun when the union withdrew the matter in the face of answers to its claim provided by the Minister.

Judge Belinda Whitcher who presided over the Labour Court matter said in her decision that the court and all the parties involved acknowledged that health workers were in the frontline of the ‘heroic’ fight against Covid-19 and that they were entitled to PPE. However, the minister had shown that while there was a national shortage of PPE, the ‘specific hospitals’ listed by Nehawu were not affected. Guidelines on the use of PPE had been issued and steps had been taken to engage with the unions on ways of dealing with the virus.

Although the union attempted to withdraw its application, without offering to pay costs in the matter, the court said it was in the interests of justice for the issues raised by Nehawu to be decided. This was so that the public was not left with the wrong impression about whether doctors and nurses at public facilities had enough PPE.

The court then worked through the claims made by the union and the response by national and provincial officials as to the situation on the ground.

The union’s list of allegedly compromised hospitals did not get off to a good start. It claimed that in Limpopo Province, at Kennedy Phalanda Hospital, the entire staff, from doctors to cleaners, lacked the technical N95 masks. However, according to the health authorities, ‘there are no records of such a hospital existing in Limpopo’, while in any case, there was stock of PPE in the province.

Continuing through Nehawu’s list of provinces and hospitals, and the shortages they were allegedly experiencing, the court compared the union’s allegations with the response of the authorities. In each case they stated that there was enough PPE and added a detailed explanation and list of stock in hand and what had been ordered.

Another hospital, listed by the union as having ‘no gloves and masks’ for any health worker, also turned into an embarrassment for Nehawu’s claim. At this particular hospital there were no shortages of any PPE, the minister said. Even without Covid-19, this hospital could not operate without gloves and masks as it dealt ‘specifically with TB and other respiratory diseases’. This meant that even in its normal functioning PPE would be available.

In the light of the information provided by the authorities, the court concluded that the union’s allegations ‘weigh up poorly’ against official denials. Nehawu had ‘not come close’ to establishing its central contention that, at the time of its application, there was a shortage of PPE at public health facilities warranting the relief it had sought.

The judge then considered the question of costs.

Normally in employment disputes the court tended not to award costs. It might seem that in this case, since the union had raised ‘matters of life and death importance to its members specifically and of interest to the public generally’, the court would be even less likely to make a costs order. But such an approach would be ‘short-sighted and anachronistic’, she said.

If the allegations that the minister and other officials had ‘refused to consult with the union’ were closely considered it emerged that in fact it was the conduct of the union’s own officials that ‘likely played a far greater role’ in damaging the ‘social partnership’ that Nehawu claimed to be concerned about.

The union had insisted on meeting the minister himself, and not ‘only’ the director-general. If this were true, said the judge, it ‘smacks of undue self-importance at the expense of finding solutions.’

Nehawu’s exaggerated and speculative claims about a PPE shortage caused unnecessary stress and panic. In addition, the court considered the minister’s view that the time and resources spent on dealing with the union’s ‘spurious claims’ ought to have been spent addressing the actual pandemic. Instead, for two consecutive days, a slew of officials had to spend significant amounts of time dealing with the application.

Whitcher said that during a national disaster, everyone should cooperate for the good of society, and that ‘a new value system’ concerning ‘acceptable behaviour’ had been thrust on everyone.

The court could not dictate that the parties had to work with a spirit of co-operation, but it could ‘adjust the standard of what constitutes frivolous and vexatious conduct in litigation.’

If the court did this, those parties who wanted to ‘pursue obviously untenable legal points, use the court process as part of other power-plays, unnecessarily consume the resources of their opponents or made allegations they cannot substantiate’ would know that, in doing so, they risked a costs order if they lost.

In response the union has issued a statement referring to ‘this rather strange judgment’ and asserting that it would appeal. Nehawu also described the costs order as ‘shocking and unwarranted’. It added this extraordinary comment: ‘Generally, going to court, the national union was alive to the fact in any capitalist society the law that governs society always favours the ruling class, the bourgeois.’

The union said that in the wake of a lengthy meeting with health officials it had decided to discontinue its legal action as there was now a commitment from the department of health to address concerns about the health and safety of members. Nehawu added that it had been able to ‘compel’ the department to agree to all its demands.

* ‘A matter of justice’, Legalbrief